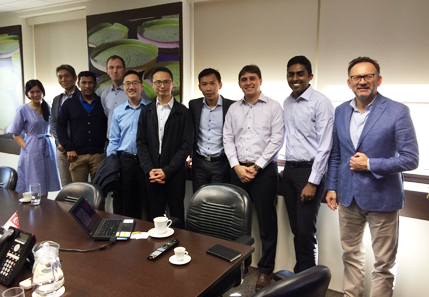 The purpose of one of the core modules in the ESSEC & Mannheim Executive MBA Asia-Pacific Program is to develop a deeper understanding of one of these three regions (Africa, the Middle East, Latin America) as a future powerhouse. The Class of 2017 chose Latin America and embarked on a one-week Study Trip to Sao Paulo, Brazil, of which 3 days were dedicated to this topic.

The main part of the course was conducted by renowned Professor Yann Duzert from the Fundação Getulio Vargas (FGV) Rio de Janeiro. Professor Duzert specializes in Negotiation, Risk, Information & Decision Management and is an expert in conducting businesses in Latin America and in particular, Brazil. He began his course with a brief, yet comprehensive overview of Latin America, focusing on the current economic and political climate of each state and their future business opportunities. In his analysis of Brazil, Prof Duzert quoted many real-life examples of large Brazilian firms such as Vale, ElectroBras and Embraer where he has been involved in consulting with them and training their executives.This was followed by a technical course on negotiation and how to reach a win-win situation in what Prof Duzert calls “New-gotiation – The Art of Negotiation for a Better Outcome”, which is also the title of his book. Through various case studies from the Harvard Program on Negotiation and drawing from unique examples of negotiating in Brazil, we learned to master a structured negotiating format while taking into account cultural nuances. 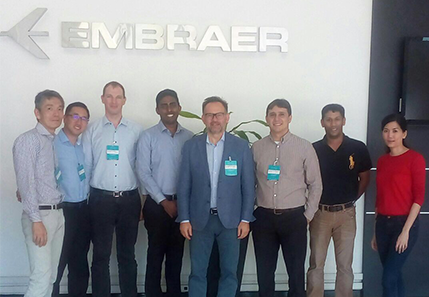 Apart from classroom lectures, two site visits and a networking session were conducted. The first was to the joint offices of International Enterprise Singapore (IES) and Economic Development Board (EDB) in Sao Paulo where we had a presentation from Regional Directors, Mr. Khor Aik-Lam and Mr. Chen Peng Fei from IES & EDB respectively, followed by an open dialogue session. Topics covered include the role of IES and EDB in Latin America, trade and investments opportunities in this region, the success and challenges of Singaporean firms in Brazil and conversely for Brazilian firms in Singapore. The Latin Asia Business Forum held in Singapore was also introduced as a bridging forum for businesses in both countries to meet, discuss and collaborate.

The company visit to Embraer was a whole-day affair starting with an introduction to Embraer at their headquarters in downtown Sao Paulo. Here, we were welcomed and warmly introduced to Embraer by their Global Marketing Manager Mr. Alan Macintyre. Embraer stands out as one of Brazil’s most outstanding manufacturing firms producing commercial, executive and military aircraft. Embraer prides itself as an innovative and bold engineering company who dares to challenge the conventional ways of designing. The evidence is in their completion of clean-sheet aircraft programmes ahead of schedule which is unlike most of its competitors. After a two-hour drive to Sao Jose dos Campos, we were given a very rare opportunity to visit Embraer’s largest factory. Here, we were shown the production lines of the executive jets, the E-jets, the painting booths and the “war-room” where staff worked around the clock to support Embraer’s spare parts logistics worldwide which ensures that its operational fleet is always ready to fly. The icing on the cake was to see the brand new E2 Jet which was stripped-down and is undergoing further testing in the hangar. The E2 jet accomplished its first flight last year and was first unveiled at the Paris Airshow only in June this year. This impressive visit to Embraer changed our perception of the manufacturing capabilities in Brazil which showcases Brazilian capabilities in a high-tech industry.

As part of the week’s programme, we covered another core module on Islamic Business with our Program Director, Professor Cedomir Nestorovic. This course is unique to ESSEC as it covers the intricacies of Islamic businesses such as halal food, the Hajj in Mecca and what constitutes a Sharia-compliant business. Being in Latin America, we also discussed the extent of Islamic business in Latin America where the population of Muslims is extremely low compared to many other parts of the world. However, it was interesting to examine how Brazil has become the world’s largest exporter of Halal poultry. 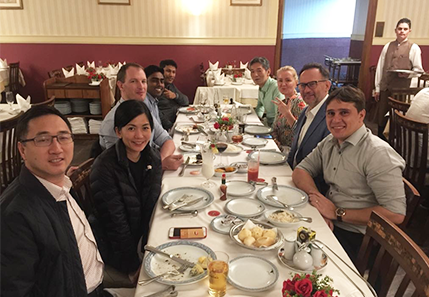 A study trip is never complete without its fair share of social and culinary activities to really immerse ourselves. This included a trip to the local churrascaria (barbeque buffet) and a networking session at South America’s only 6-star hotel, the Palácio Tangará where we were introduced to the Chandon from Brasil by Moet Hennessy. Over sparkling wine and local canape, we discussed the challenges faced by foreign companies in setting up businesses in Brazil with Mr. Yvan Bernadin, an expert consultant in Brazilian Business Development.

This study trip has certainly helped us appreciate the course on the Future Powerhouse – Latin America much better through the actual experiences of being in Brazil and immersing ourselves in the language, culture, and the working environment.

Let us hear from the other participants!

“Some Latin American countries have seen economic growth and power in recent years, and it is an important opportunity for us to see how a developing country can succeed in the future. We got to experience a different culture, in a country that is often overlooked in terms of its business successes. Brazil is a resource-rich country with huge potential, which makes it a great location for MBA students to visit.” – Anil Abraham

“I enjoyed the trip very much as it provided me with a real-life experience in Brazil, the largest economy in Latin America. The recent urban development and vibrant cultural lives in Sao Paulo left a strong impression on me. The course on Business Negotiation in Latin America came in as a perfect match to our study journey and imparted to us valuable knowledge in the cultural difference between Asia and Latin America. In short, it was a fruitful and memorable journey in my EMBA study!” – Mark Chen

“Through the Brazil residency, I realized that “seeing is believing” is absolutely true. I could understand Brazilian company’s strength and uniqueness well by discussing with employees and seeing the production line. I was deeply impressed by the story that Embraer had overcome thousands of difficulties in getting certification from FAA.” – Katsumasa Asami

“I particularly enjoyed the visit to IE Singapore as it was informative and insightful to the complexity of business dealings in Latin America.” – Syndy Neo

“The study trip to Brazil gave us some first-hand insight into the business and economy of South America and particularly Brazil. From discussions with local and foreign seasoned experts to site visits at one of the most advanced companies in Brazil, Embraer, we have been harvesting information that we couldn't have gotten from classroom discussions. This was an excellent opportunity and I'm glad I was part of it.” – Mathieu Massin